April Fools' Day is coming up on April 1st, and you'll want to be prepared. After all, you don't want to fall victim to any political practical jokes. My Political April Fools Day limerick should help.
Posted by Mad Kane at 8:40 PM 3 comments:

Now that health reform has passed, are you all intimidated by Republican threats to do stuff they've been doing all along? (There's a limerick, of course.)
Posted by Mad Kane at 9:07 PM 2 comments: 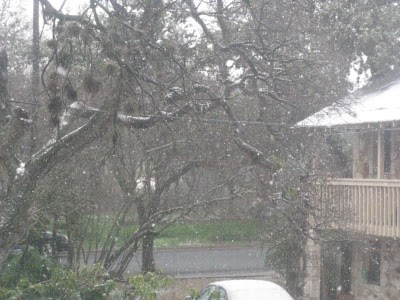 Plumpest snow globs I've ever seen this far south. It was rather surreal. A bit like the 3" long rocket-shaped hail last winter. Extreme weather is thrilling. Scary. And it's going to get more extreme. Been through Missouri tornadoes, hurricanes, wildfires and earthquakes, desert floods, Austin floods, blizzards, mudslides, El Nino, La Nina, droughts, and forest fires. There's a wild joy in nature busting loose, even when there is real danger. Somehow the primordial elements seem more in the order of things, rather than say, a car wreck.

Notice how green it is, even though it's snowing. Reminds me of a March--gee, 17 years ago--when I flew to Austin from NJ to attend Paul B's last party. We had been through 23 separate snow storms since New Year's Eve, with ice still on all but the major highways. As the plane dropped into the old Mueller airport, something felt off-kilter. Once we dropped below the clouds, it was emerald green as far as the eye could see. There wasn't a sprig of green in Jersey. A lush 18 inch thick carpet of grass stunned my snow-accustomed eyes. Bluebonnets hadn't yet bloomed, but it was obviously going to be a bumper year. Much like this spring will be.

After years of relentless sunshine, heat and cold, withered plants and panting trees, Austin is a different animal this winter, metamorphosed by rain. Only in Texas skies can the color gray be described as vibrant. Light lends a different character to colors under the lowering clouds, intensifying and showcasing the metamorphosed earth. Moss covers live oaks like a coat of paint, contrasting with the wet, velvet black bark. Rainbows shimmer in the humid air. Gray glows argent, like burnished silver jewelry. Neighborhood cats, thick coats sprinkled with fairy dust, perfect muddy footprints trailing up and over my white car. A bird flutes a surprised, subdued query to unaccustomed early morning rain.

Grackle flurries restlessly prowl in the twilight, one eye on the dumpsters outside the eateries close to the river, one leg on trees perilously bending under the weight of tens of thousands of the buggers, moving like black schools of fish, pulled apart and collapsing together again like taffy, yet somehow  averting mid-air collisions and managing not to knock a neighbor off a perch.

New buildings loom over downtown like giant, shiny tinker-toys. Or maybe metallic mushrooms. The currently tallest one looks suspiciously like a flash drive standing on end. Folks coming to SX won't believe how the skyline has changed in just one year. There's something vaguely nauseating about how much building is going on, when news from other towns describes a completely different story. Where is all the money coming from? Who will populate the buildings? Will they fill as quickly as they went up? Will it be a repeat of the 80's, when the original "skyscrapers" went up, only to stand empty and forlorn for who knows how long?

Changes abound. Weddings and births, changes in circumstances. Can't control the weather, really can't control anyone but your own self. Wish life came with seatbelts. I'm gonna enjoy the ride anyway. 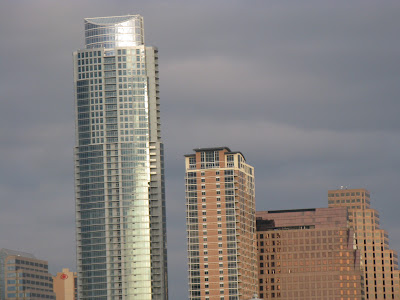 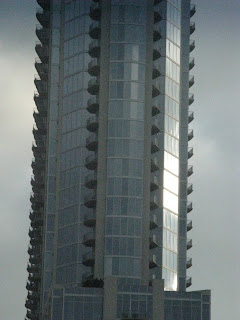 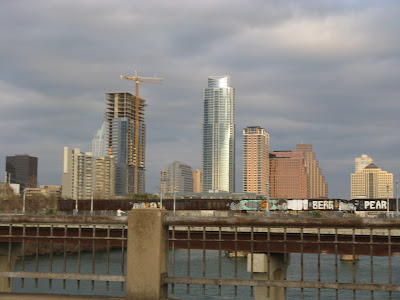