It's Another Bush Crisis

During the last week, I've read a slew of posts and columns about our newly "de-swaggerfied" (shouldn't that be a word?) President. My latest blog post includes a poem which, I think, sums up Bush (and Rove's) post-Katrina angst:

Here's how it starts:

It's Another Bush Crisis
By Madeleine Begun Kane

"It's another Bush crisis,
And day after day,
Dub's stooges are spinning,
While Bush says, "let's pray."

He is not on vacation.
He's handling affairs.
We know that from photos
That show Dubya cares..."

The entire poem is here. And my podcast audio version is here.
Posted by Mad Kane at 4:02 PM No comments: 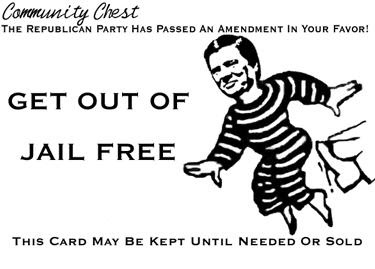 Researchers at the University Medical Center in Utrecht in the Netherlands speculate that there is a shared origin early in life for both left handedness and developing breast cancer, possibly exposure to hormones in the womb.

"Left handedness is associated with breast cancer, most specifically pre-menopausal breast cancer," said Cuno Uiterwaal, an assistant professor of clinical epidemiology at the university, in an interview.

WTF? Maybe I'm just a left-handed woman whistling past the graveyard, but I need to see a lot more evidence that there's a real correlation here before I buy it. Right now I put these findings roughly on the same level with the Less Pirates = More Global Warming theory [may the FSM forgive my heresy].

Okay, but say that this all turns out to be true. Most likely it won't affect me; I'm already postmenopausal, so I dodged that bullet. Why does that thought give me little comfort?

Whatever. It probably means I won't be able to give up my semi-annual, delightful pressing engagement with the friendly neighborhood mammographer anytime soon.
["Pressing engagement"! Ha ha! Mammogram humor! Whoo, that's a good one!]

aka "Ode To a Mammogram"


For years and years they told me,
Be careful of your breasts.
Don't ever squeeze or bruise them.
And give them monthly tests.

So I heeded all their warnings,
And protected them by law.
Guarded them very carefully,
And I always wore my bra.

She stepped upon a pedal,
I could not believe my eyes!
A plastic plate came slamming down,
My hooter's in a vise!

My skin was stretched and mangled,
From underneath my chin.
My poor boob was being squashed,
To Swedish Pancake thin.

Excruciating pain I felt,
Within it's vise-like grip.
A prisoner in this vicious thing,
My poor defenseless tit!

"Take a deep breath" she said to me,
Who does she think she's kidding?!?
My chest is mashed in her machine,
And woozy I am getting.

"There, that's good," I heard her say,
(The room was slowly swaying.)
"Now, let's have a go at the other one."
Have mercy, I was praying.

Next time that they make me do this,
I will request a blindfold.
I have no wish to see again,
My knockers getting steam rolled.

If I had no problem when I came in,
I surely have one now.
If there had been a cyst in there,
It would have gone "ker-pow!"

This machine was created by a man,
Of this, I have no doubt.
I'd like to stick his balls in there,
And see how THEY come out!

At the end of this classic it invariably will say "Author Unknown". Chah, right -- and you can be sure the woman who wrote it wants it to stay that way, too. 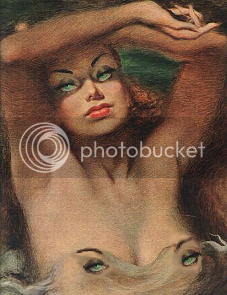 Posted by Tild Dallelie at 8:31 PM No comments:

Some Blog Sisters may be interested to know that there's an alternative to traveling to Texas next week to attend the (free) Second World Congress on Matriarchal Studies: a real time web broadcast (webcast) of the conference provided by FIRE www.fire.or.cr.

FIRE, the Feminist International Radio Endeavour, will present a daily live streaming event of the Conference following the scheduled presentations.

And no, Matriarchy isn't just patriarchy in skirts!

Even today there are enclaves of societies with matriarchal patterns in Asia, Africa, America and Oceania. None of these is a mere reversal of patriarchy where women rule -as it is often commonly believed -instead, they are all egalitarian societies, without exception. This means they do not know hierarchies, classes and the domination of one gender by the other. They are societies free of domination, but they still have their regulations. And this is the fact that makes them so attractive in any search for a new philosophy, to create a just society. ( Matriarchal Society: Definition and Theory by Heide Goettner-Abendroth)

Today, 21 September, has been designated the International Day of Peace by the United Nations. It was established in 1982 with this resolution:

"to devote a specific time to concentrate the efforts of the United Nations and its Member States, as well as of the whole of mankind, to promoting the ideals of peace and to giving positive evidence of their commitment to peace in all viable ways… (The International Day of Peace) should be devoted to commemorating and strengthening the ideals of peace both within and among all nations and peoples."

You can watch a video of UN Secretary General Kofi Annan's message for the occasion from seektv.tv. You can also take the Peace Pledge.

Please take a moment at noon to observe a minute of silence in hope for a world free from oppression, war and genocide.

(cross-posted at I See Invisible People)
Posted by Terry at 10:59 AM No comments:

I've written two limericks about John Roberts' nomination to be Chief Justice of the U.S. Supreme Court. Here's one of them:

Though Judge Roberts Is Getting A Hearing
By Madeleine Begun Kane

Though Judge Roberts is getting a hearing,
To measure his outlook and bearing,
He's determined to hide
Views that Dems can't abide.
His convictions he simply ain't sharing.

On Saturday, Julia of Sisyphus Shrugged held another of her delightful lefty blogger gatherings in Queens, New York. And I'm pleased to report that this time, not only did I bring my digital audio recorder, but I actually remembered to use it. Okay, I did get some prodding and nudging from
Elayne of Pen-Elayne who, by the way, took pictures.

Throughout the evening. I dragged sundry bloggers (and the occasional blogger spouse) to the back of Julia's yard for -- hey, get your mind out of the gutter -- mini-interviews with them. This Mad Kane Notables
post includes 6 MP3 links to my chats with Elayne, Julia, Michael Berube, Barbara of the Mahablog, Jen of The News Blog, and Scott of Lawyers, Guns and Money. (Another batch of mp3 interviews will be posted in the next day or so.)
Posted by Mad Kane at 3:34 PM No comments:

FEMA's Brown sent back to WA

Despite the fact that Washington continues to defend their decision to hire him in the first place, and to defend his performance in the wake of Katrina's devastation of New Orleans:

Also from the NY Times: "Allen, the Coast Guard's chief of staff since 2002, has spent his entire career in the Coast Guard since graduating from the U.S. Coast Guard Academy in 1971. He was director of resources under Adm. James Loy, who later became Homeland Security's deputy secretary.... He has been in charge of Coast Guard operations in South Carolina, Georgia, most of Florida, and throughout the Caribbean."

So now the disaster recovery will be headed by someone apparently competent to do so. What is interesting is that Brown is still the head of FEMA, he has just been relieved of his disaster duties. But what does one do to head the Federal Emergency Management Agency without disaster duties? Isn't disaster all they do?

In any case, let all our prayers be behind Allen's success - and Brown's complete ouster!

For a more personal reflection on the New Orleans disaster and how it is highlighting the importance of community connection and inner refuges in our lives, see this post at the Indigo Ocean weblog: What Holds Us Together.

On a sadly humorous closing note (if that is possible) Here is what the former first lady had to say about the evacuees: "so many of the people in the arena here, you know, were underprivileged anyway,' she said, 'so this is working very well for them." - Source NY Times: Barbara Bush
Posted by Indigo at 2:31 PM No comments:

The FEMA head Michael D. Brown
Helped cause thousands to suffer and drown.
Now he's dodging the blame.
Who's at fault? Val'rie Plame?
Let's throw Dubya and Brown out of town.

All three of my FEMA limericks are here.

And my podcast version is here.
Posted by Mad Kane at 12:37 PM No comments:
Newer Posts Older Posts Home
Subscribe to: Posts (Atom)