"Finally, in nomination news, it seems that the Alberta-no-the-liberal-is-silent-Liberals are once again becoming a home for PCs who don't take losing in their own party so well.

Today, they announced that Debbie Cavaliere will run for them in Edmonton Meadowlark.

Aside from being a former Edmonton Catholic School Trustee, Ms. Cavaliere was also recently a contestant in the PC nomination for Edmonton Meadowlark. She was in the race right up until it became clear that there was no way she could sell enough memberships to win the race, at which point she quit.

Of course, the official spin is that she didn't find the party to her taste. Interesting. I wonder if she felt the same way when she was attending PC functions or door-knocking for former MLA Bob Maskell?

Amazing what a free ride to the ballot will make a person say, isn't it?
Ms. Cavaliere will face off against emergency physician Dr. Raj Sherman... the guy who sold enough memberships to win the race she quit.

The Edmonton Meadowlark race is an open one after one-term MLA Maurice Tougas decided that he'd rather be back writing his gossip column at the Edmonton Examiner."

Posted by Allie Wojtaszek at 6:43 AM No comments:

We are not social eyeballs.

Posted by Jeneane Sessum at 7:51 PM No comments:
Labels: not, social eyeballs

I've had a delightful email exchange with the author of The Perimenopause & Menopause Workbook. Kathryn Simpson and Dale Bredesen have written a great, informative book for women dealing with the challenges of hormones.

From out of balance estrogen and progesterone, to thyroid and adrenal imbalances, to discussions on bioidentical hormones, the book is very informative and reassuring. If you'd like to talk with the authors, drop Kathy Simpson an email at Info AT hormoneresource DOT com.
--
Posted by Jeneane Sessum at 12:07 PM No comments:
Labels: good books, hormone hell 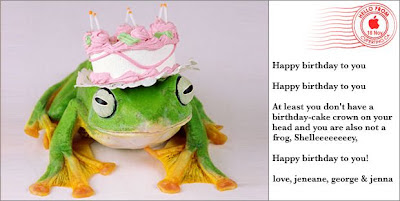 See, social media IS good for something!
HAPPY BIRTHDAY SHELLEY!!!

The week in pop litter was painted in hope, desperation and folly.
Thank Sappho and her minions, then, for some good Lesbian intelligence.
As you know, I love news about Licker Licensees. First, we learn that local lez Portia di Rossi will soon go the growl with Joely Richardson on Nip/Tuck.
“I am a lesbian playing a lesbian,” she said in a radiant moment of self-awareness. Apparently, she and Ellen discussed the matter for some time and Portia realised that FINALLY it was time to stop HIDING her SEXUALITY.
Except, of course, that she hasn’t really. That’s one of only three things I know about her. The other two being (a) she was in that hateful program Ally McBeal and (b) according to an unreliable acquaintance, she’s a really good kisser.
And then, news surfaced that Pink might also be a hobbyist Muff Diva.
Do you care? Would it surprise you any more, than say, the SHOCK revelation that George Michael was gay? I don’t. And no it wouldn’t.
The thing that surprised me, erroneously as it turned out, is that she wed Corey Hart. Remember him? Sunglasses at Night?
This was from 1984 when, I imagine, a young Pink was yet to buy her first copy of Bodyweight Exercises for Buff Women.
There was no excuse at all for Corey Hart. I checked my vinyl to be sure. 1984 wasn’t a terrible year. In 1984 I bought The Go Betweens’ Spring Hill Fair, Lloyd Cole’s Rattlesnakes and Madonna’s Like a Virgin. I still listen to all of these records. No one listens to Corey’s woeful First Offense.
Some diligent googling reveals, however, that his name is Carey. Not Corey. And he rides motorbikes and sexually ambivalent popstars for a living. So, don’t be confusing them, ok?
Apart from this: britneyparislindsay. Couldn’t give a toss. Mais, J'attends novembre 25 quand je ne serai pas embarrassé pour être australienne. Vive le changement !
Posted by Helga Koch at 10:49 PM No comments:
Labels: ass, sexuality

Ladeez:, puh-lease. Am I the only sister? Sup? In my efforts to keep this blog aloft -

Albus Dumbledore, wizard and avuncular defender of kiddies, is a Big Help to His Mum. Yes. The Hogwarts headmaster is, er, a head master.

Our source for this shocking intelligence is not, on this occasion, the pervie architects of Harry Potter fan fiction. It is in fact JK herself who chose to disclose Dumbledore’s preference for Deep House, tasteful lighting and cock.

When Rowling is not busy fashioning the kind of gaudy sentence that makes your authoress read like Hemingway by contrast, she’s Out There, apparently, sticking it to the man.

At New York City ’s Carnegie Hall a few weeks back, Joanne gave the fans the kind of minutiae they tend to eat up with a runcible spoon. Or, indeed, whatever the hell implement practitioners of the dark arts use to feed their unholy faces.

It seems, I’m told by my breeding colleagues, that JK’s info drip filter is emptied with great zeal. She could say, “Well, Snapes won’t sleep in anything but fretted linens. And he just loves the music of Spandau Ballet.” (Who doesn’t?)

Apparently, such mild revelations regularly afford a new lens for eager readers. It’s a harmless, job-creating fancy for all concerned. In this way, Rowling is much like a Cultural Studies Department.

And so, it seems, do literally thousands of others. The last fortnight saw a relentless battery of headlines regarding this “story”. Wiki-reality has been transformed no less that 200 times in the last 24 hours. Bloggers, of course, are in a state.

“Why the hell should a children’s book have to include some idiotic political message?” asks one.

This incident will sell books. Maybe Rowling is not content to simply have more money that the Queen. Maybe she wants to actually purchase ER II as a mantelpiece ornament. Or, maybe she cares about The Gays.

Whatever her agenda, Rowling has now done much more than Out a fictional character. She’s given a whole lot of boring career pouffes something to crow about.

A gay spokesman told the BBC, “It's great that JK has said this. It shows that there's no limit to what gay and lesbian people can do, even being a wizard headmaster.”

And in news just to hand, Gay and Lesbian People have also earned the right to be thick and boring tw-ts. This is the sort of response that deters one from activism. (Well, that and laziness. And the chicks are rarely cute or well groomed.) This is why I turn a hostile shade whenever anyone calls me a Lesbian. Even when delivered respectfully, it is always capitalised and feels as though one has been awarded some kind of 25 metre muff-diving certificate.

As I'm sure you'll agree, enjoying sex is hardly a newsworthy achievement. Even for the founder of the Order of The Phoenix.
Posted by Helga Koch at 12:29 PM 1 comment:
Labels: ass, books, sexuality
Newer Posts Older Posts Home
Subscribe to: Posts (Atom)